Morgan at the Mission Motorsport Race of Remembrance 2018

Running the race for the fifth consecutive year, the Race of Remembrance is a 12 hour endurance event run by the Mission Motorsport charity that aims to help injured servicemen through motorsport.

Morgan were competing with 3 Plus 4 Clubsports, with drivers Tony Hirst, Craig Hamilton-Smith, Paul Voakes, John Richards and Tom Richards being supported by a compliment of University of Wolverhampton Students as part of the UWRacing team.

An endurance race with a twist, the race has a mid-point break for a remembrance service in the pit lane where all drivers, teams and spectators gather. This year, the service was held on the 100th anniversary of the end of WW1.

Conditions were challenging, as Plus 4 Clubsport owner and racer, John Richards, commented, “When I was doing my night shift, driving by brail and trying to stay on the track I was wondering what on earth I had got into. It was cold, it was wet and as poor conditions as racing can get. Then it occurred to me that 100 years ago not only would I have been wet and cold, but I also would have been getting shot at or shelled with a lower chance of survival. It was a privilege to take part in the event, and humbling to watch the Mission Motorsport team during the weekend.”

The Morgan team finished 22nd overall, out of 45 starting cars, and completed 312 laps. In the team event, Morgan were 7th overall and 2nd in class. All 3 Clubsports performed perfectly over the 12 hours in challenging conditions.

Congratulations to Mission Motorsport for a fantastic event, to all the teams for competing and to the servicemen and women. Morgan were delighted to be involved and look forward to returning in 2019.

Plus 4 Goes Platinum: The Morgan Plus 4 70th Anniversary Edition

As production of Morgan’s steel chassis draws to a close, a special Plus 4 celebrates 70 years of Morgan’s most popular model. 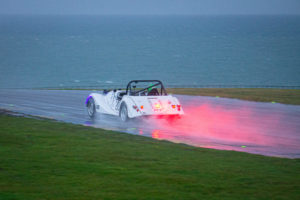 A race to remember

Anglesey lies off the north west coast of Wales. On a cold, wet and windy November night, it may not be the

Today marks 100 years since the birth of Peter Morgan. Son of the company’s founder, HFS, Peter worked for Morgan for more